Sales of certified pre-owned (CPO) vehicles increased 8% year over year in January, starting the year off with the highest CPO sales for January in a decade. For the month, 215,959 CPO units were sold according to an analysis of Motor Intelligence data, down 8% month over month compared to December, which is typically a high-volume month for CPO sales. 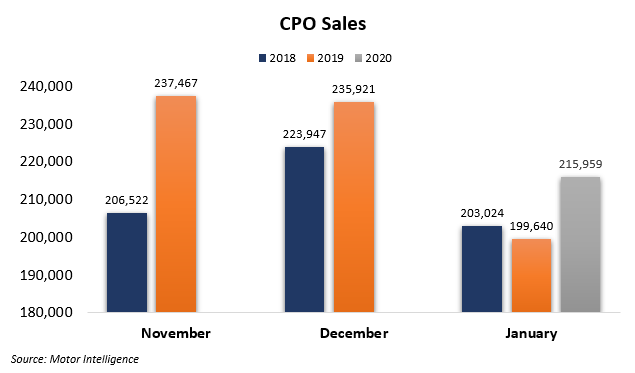 Automakers are recognizing the increasing importance of CPO vehicles as well. For instance, Honda and Acura announced upgrades last year to their CPO programs that added benefits to consumers and earned them recognition from Autotrader, a Cox Automotive company, as among the 10 best CPO programs.

This year, American Honda launches a national ad campaign, including television ads and a social media program, to promote Honda and Acura CPO to attract consumers frozen out of the new-car market due to affordability issues and to help their dealers be more profitable. Similarly, Mazda launches Mazda Finance on April 1, in part, to address the surge of off-lease volume coming back to the market.

Cox Automotive is forecasting CPO sales to remain strong in 2020 due to vehicle affordability challenges, the aforementioned ample supply of off-lease vehicles, and an improving CPO mix. More off-lease vehicles returning to market this year will be popular SUV models, the favored body style for today’s buyer.