Congratulations, fine reader, you are part of a winning team! Well done.

You’re an important part of an economic expansion that’s been trucking along for 121 months now, a new post-World War II milestone. Our record upward run began back in June 2009, the month General Motors, following Chrysler, filed for bankruptcy protection and the National Bureau of Economic Research marked as low water in the Great Recession. We’ve been rising ever since, helped along by you, the consumer, and record low interest rates which only recently have been pushed upward by a cautious Federal Reserve. As we entered July 2019, the record was set.

Our decade-long economic expansion has been very good for the automobile business in the U.S. Yes, we lost a few well-known brands along the way—R.I.P. Mercury, Pontiac—but for the most part we’ve watched vehicle sales track north into record territory, as jobs became plentiful and a painful recession faded into the past.

Our economic expansion also saw new-car prices climb rapidly, as feature-laden SUVs and crossovers with advanced safety technology and new levels of luxury became the norm at U.S. dealerships. Recently, the average manufacturer’s suggested retail price (MSRP) for a new vehicle moved above $40,000; full-size pickups routinely cost more than $50,000 now, roughly equal to the average annual household income back in 2009, the start of our recovery.

Our team took a quick look at the past decade through the lens of auto sales. Here’s what we saw: 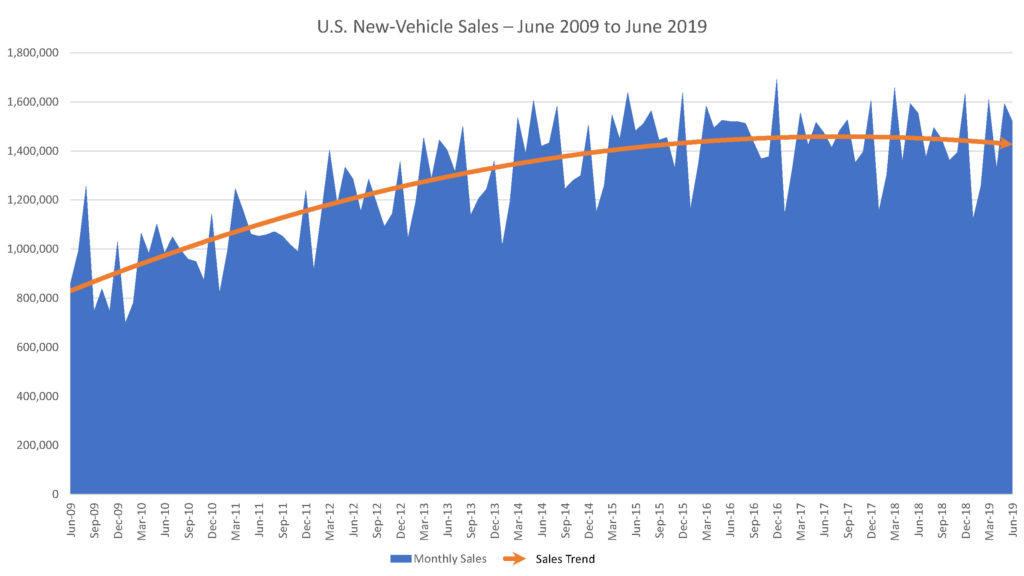 By December 2010, the worst months were in the rearview mirror and the industry posted its best month of the year. Sales in 2011 were noticeably stronger. We were on our way.