The already struggling Chevrolet Bolt electric car got another jolt this week when the federal tax break on it was reduced.

Beginning April 1, the once $7,500 federal tax break for purchasing an electric vehicle began winding down for General Motors’ EVs, like the Bolt, and plug-in hybrids, like the Chevrolet Volt that is being eliminated from the product line. The tax break is lowered and eventually phased out once an automaker hits the 200,000-sales mark for such vehicles. Only GM and Tesla have hit the ceiling.

The Chevrolet Bolt is made in Orion Township, Mich., the sole manufacturing source for the vehicle that is sold globally. Introduced as a 2017 model as the first affordable electric car with a long 238-mile range on a charge, the Chevrolet Bolt went on sale in the U.S. initially in just a few states and then nationwide. In 2018, only its second year, U.S. sales totaled 18,000 units, down 22% from the previous year. Meantime, inventories bloated, as the chart indicates, to a high of some 140 days of supply when about 60 is ideal. The sales slide continues in 2019 with first-quarter Bolt sales off 1% at about 4,300 units. 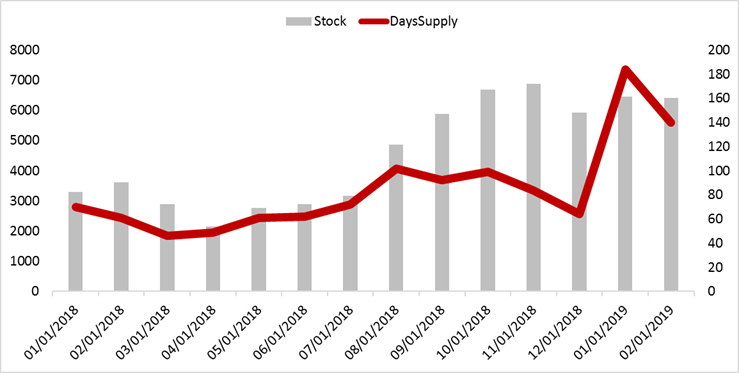