It is important to look at average days in inventory for retail used vehicles because as used retail inventory ages, dealers begin to slow wholesale purchases. 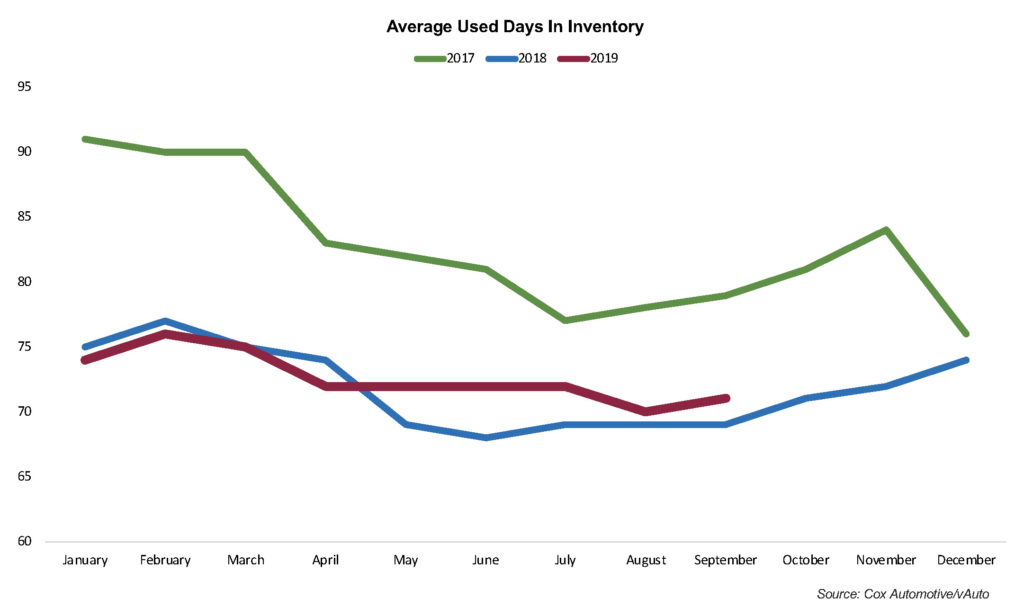 2017 began with the most days in dealer inventory for used vehicles, for all three years, with the month of January having an average of 91 days as measured by vAuto and illustrated in the chart above. After beginning the year at higher levels, 2017 saw declining age until the end of the year. Year-over-year comparison for 2017 and 2018 shows rapid increase in demand. Specifically, within the spring and summer months of 2018, the average days in inventory was ranging between 65 and 70 days. Overall, 2018 saw age declining rapidly year over year consistent with price dynamics.

This year started out very similar to 2018, but when we got into late spring and early summer, there wasn’t as much movement and demand as last year. Notice how age increased in September—like it did in October 2018. At the end of the month, days in inventory hit 71 days.

As average days increase, dealers become more selective with prices, leading to a drop in sales conversion rates in wholesale lanes. This encourages sellers to lower price floors in order to sell and wholesale values decline as a result.

See the latest on the Manheim Used Vehicle Value Index to learn more about wholesale values.