Fiat Chrysler reports second-quarter financials July 31 before the U.S. stock market opens. Wall Street analysts expect FCA to post positive earnings, though down from a year ago on lower revenues.

In the U.S., FCA’s largest market, the automaker sold 597,685 vehicles, down a scant .5% from last year’s 600,000-plus quarter while total industry sales in the quarter were down 1%, according to Cox Automotive data.

The Ram brand was the story for FCA. Sales of the Ram pickup, launched in 2018 in redesigned form, soared by nearly 39% to 179,454 trucks, pushing the entire brand up 34%. The Ram 1500 pulled into second place behind Ford F-Series in sales volume, ahead of the usual No. 2 Chevrolet Silverado, which is in launch model for its redesigned version. Ram had been selling the previous generation 1500 alongside the new model. 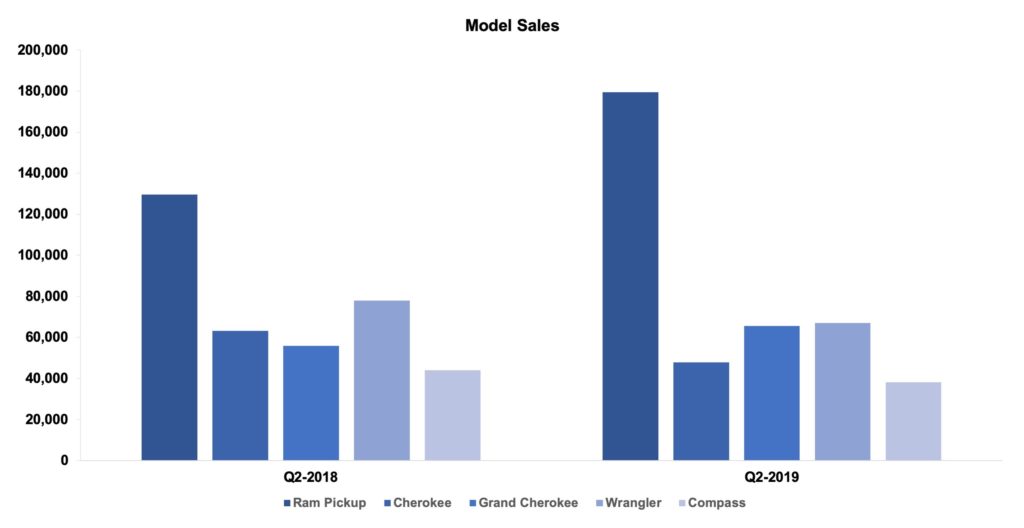 To beat Chevrolet, FCA boosted Ram incentives by 8% to an average of $6,358 per vehicle, according to Kelley Blue Book data. Still, the average transaction price (ATP) for Ram pickups, which also include the heavier duty models, were up nearly 6%, surpassing the $50,000 mark for the first time. Ford F-Series ATPs hit the $50,000 mark a year ago and closed Q2 at $52,000. Silverado’s ATP was at about $48,000, but GM is just now launching the heavy-duty versions that carry higher price tags.

FCA’s Q2 financial report may reveal whether the beefier ATPs on Ram helped or if rich incentives damaged the bottom line.

The rest of FCA’s brands, including Jeep, had a rather dismal second quarter. Jeep sales, which have of late buoyed the rest of FCA, slipped nearly 9% in Q2, despite the addition of the Jeep Gladiator pickup truck, which may be competing against the Wrangler for sales. Sales of the cheap Jeeps – the Cherokee and Compass – may be hurt by the affordability challenges faced by less credit-worthy buyers, like younger ones, who no longer can afford or can’t get financing on the cheaper Jeeps.

Sales of the Chrysler brand, which include only the Pacifica minivan and aged 300 sedan, fell nearly 23%. Pacifica sales have fallen as minivans have fallen out of favor. The bulk of minivans in total this year have been purchased by fleet operators.

FCA has designated Alfa Romeo as a global brand for growth, but it has not performed. U.S. sales in Q2 fell nearly 27% to 4,751 vehicles, off last year’s peak when the Stelvio SUV was introduced. 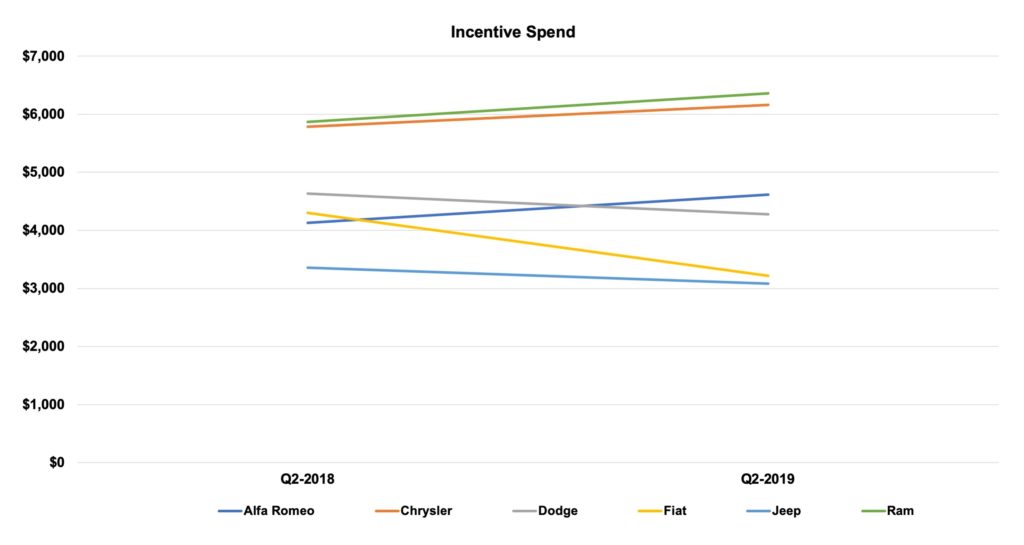 Looking ahead, analysts are concerned that FCA is too dependent on the U.S., where sales are weakening this year and yet-again next year, according to Cox Automotive’s forecast. FCA also faces serious challenges in terms of sales as well as meeting emissions standards in Europe, its other major market.