An analysis by the Cox Automotive Industry Insights team indicates General Motors continues to have ample supply of new vehicles to sell, despite a strike and work stoppage that has entered its fourth week.

According to Cox Automotive estimates, GM’s September sales were down by just over 11%, generally in line with the overall market. Total Q3 sales, as reported by the automaker last week, were relatively strong, up over 6% from Q3 2018, and ahead of the industry. And there is no indication that GM turned up the tap on incentives in September either. In that regard, it was smooth sailing in the rough waters caused by the strike.

The analysis shows GM had an 81 days’ supply of total car, truck and SUVs at the beginning of October, above the industry’s 66 days. Buick, Cadillac, Chevrolet and GMC all are well above industry average, with Chevrolet the lowest at 78 days. (Note the low sales volumes in September impacted the calculations, which in some cases saw the supply increase versus August.)

Supply of the important new full-size pickups from Chevrolet and GMC dropped from August but remain well above the industry average at 90 and 80 days, respectively. In fact, supply does not yet seem to be an issue with any of GM’s key, money-making products, as illustrated in the chart below. 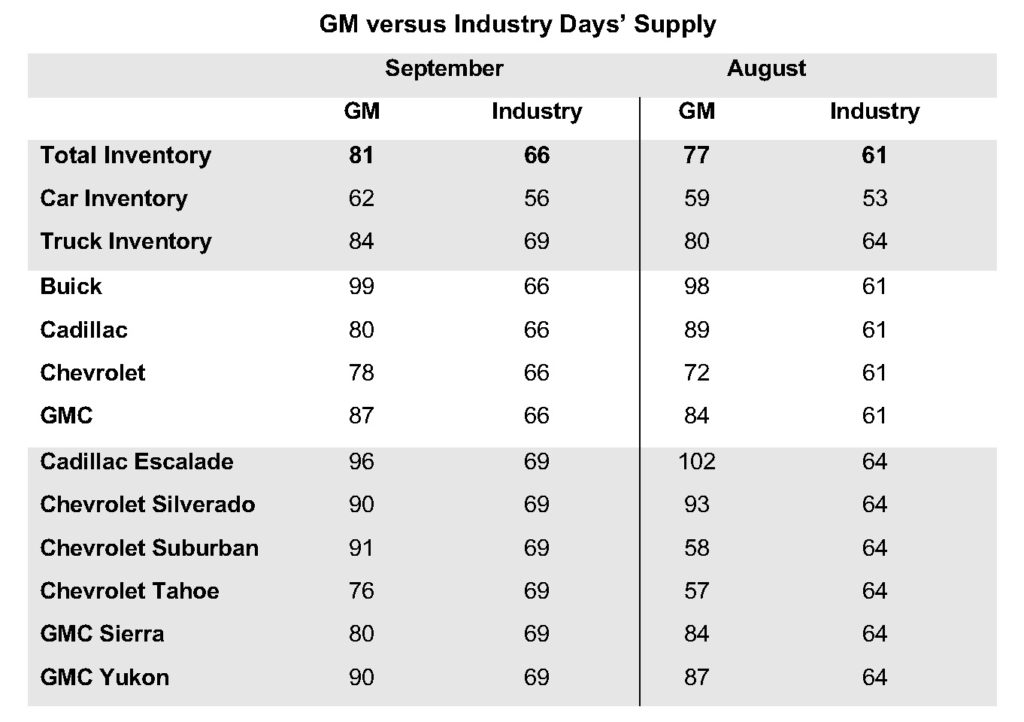 GM dealers are indicating deliveries of parts have dropped off significantly making service a challenge. Some dealers are delaying both routine service work and needed repairs, which will cut into profitability. New-vehicle inventory, however, does not appear to be an issue. Certain colors or trim packages may be in short supply, which may affect a small number of customers, but, in general terms, GM still has plenty of inventory to sell as the general strike rolls on.