Honda Motor Co. reported Wednesday lower profits for the its fiscal year ended March 31 and a loss in the quarter that closed out the period, prompting the Japanese automaker to lay out future plans to streamline vehicle offerings and cut costs.

Honda recorded a $5.5-billion profit for its fiscal year, down 42% from the year earlier, and an operating profit that was 13% lower. For the fiscal fourth quarter, Honda posted a $188-million loss, a reversal from a 108-billion-yen profit in the year-ago quarter, despite a 3% rise in quarterly sales to $37 billion.

Chief Executive Takahiro Hachigo announced Honda will not cut the number of nameplates but will reduce by a third the number of model variations on global nameplates like the Civic, Accord, Fit and CR-V by 2025. Honda will reduce complexity and consumer choice in the name of efficiency by, for example, limiting the variations of control panel layouts and color combinations offered.

Honda will push to improve production efficiency, increasing capacity utilization to 100% from the current 90% globally by 2020. The automaker will introduce a new vehicle platform – named simply Honda Architecture – next year as well as a two-motor hybrid system across its global vehicle line. The architecture aims to communize about 70% of the components not seen by customers.

At the same time, Honda will grow investments in next-generation technologies. It will move 30% of development resources for mass-production vehicles to R&D. Honda intends to electrify two-thirds of its global lineup by 2030 and achieve 100% electrification in its European offerings by 2025. The new hybrid system will debut in a Fit at this fall’s Tokyo Motor Show. Honda’s goal is to achieve cost and profit parity with electrification compared with gasoline engines by 2022.

Honda’s U.S. performance in the quarter ended March 31 was solid. American Honda reported sales up 2% to 369,787 vehicles in a market that overall was down. Honda brand sales rose 1% to 333,402 units in the non-luxury market that was lower. Luxury sales in Q1 rose 1%, and Acura far outpaced the category with sales up nearly 9% to 36,385 vehicles. The increases bumped the automaker’s market share by .4 percentage points. 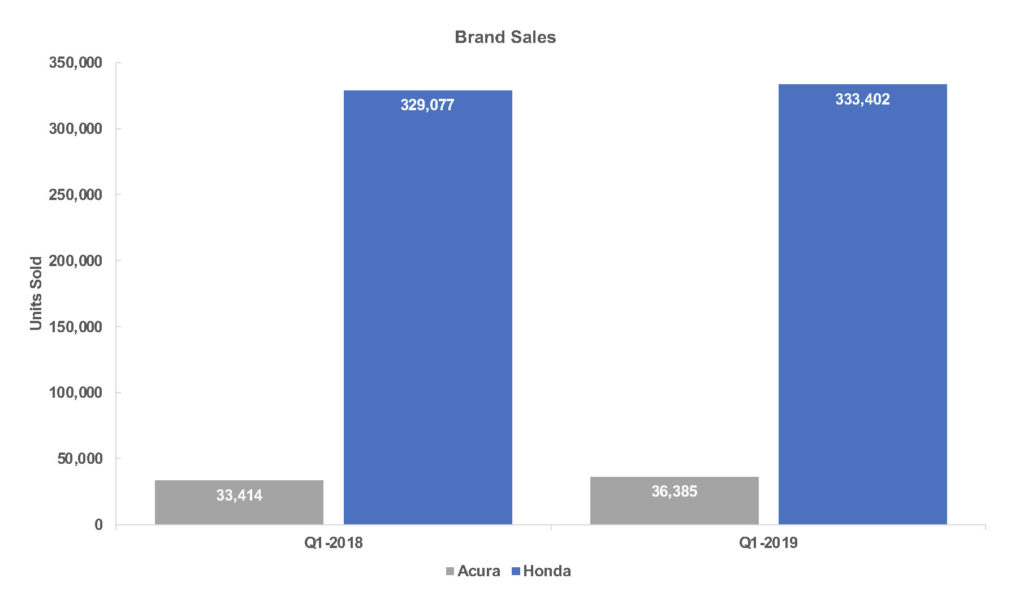 The new Acura RDX sport utility, now the brand’s best seller representing more than half of all Acura utility sales, is driving the brand’s sales increases, with sales higher for 10 consecutive months. The RDX was the No. 1 shopped luxury vehicle on Kelley Blue Book, and that shopping converted to RDX sales, which were up 35% in Q1. Acura’s next-best seller, the MDX utility, had sales up 4% in Q1. Autotrader recently named the RDX the Best New Car for 2019.

Utilities led the quarter for the Honda brand as well with CR-V sales 6% higher at 87,280, now Honda’s best-seller. Honda’s next best-seller, the Civic, racked up sales of 78,185 units, despite a 5% decline. The Honda Accord bucked the trend of declining midsize sedan sales, posting a 5% increase to 64,411 units. The Honda Pilot had sales down 13% for the quarter but still at more than 30,000 units. The new midsize Honda Passport just began selling recently, which may steal some Pilot sales. The Odyssey, down 7%, was in line with the minivan segment’s decline. 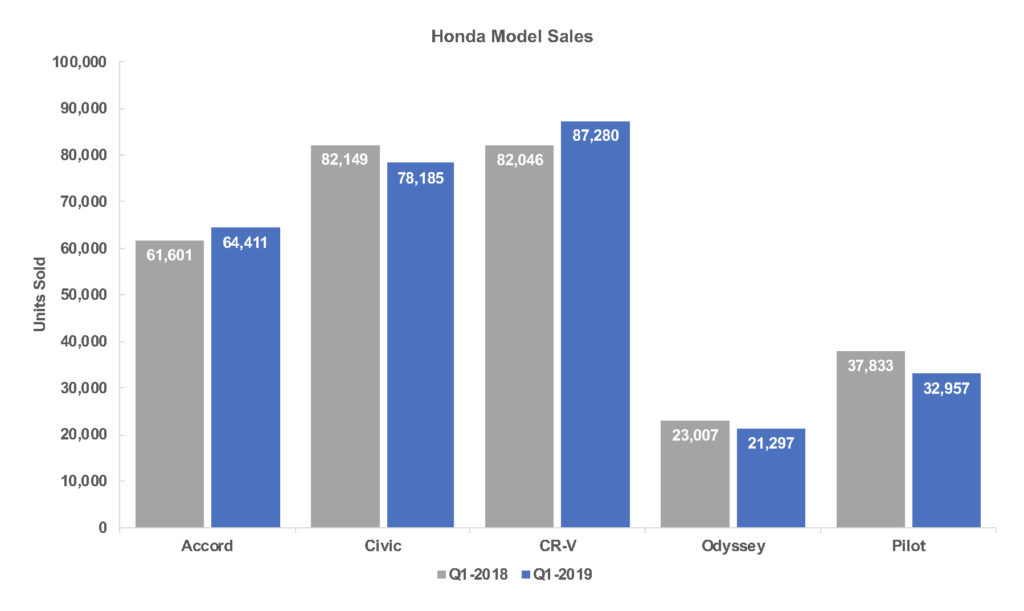 Honda remains a stingy spender when it comes to incentives, ranking second lowest in spending to Subaru. Still, Honda did increase spending during Q1 to above an average of $1,517 on Honda models and $6,680 on average on Acura models with the biggest incentives on slow-moving cars. A lower transaction price on the Accord hints at higher incentive spending.