Late last year, Ford lowered its earnings guidance for 2018, in part, due to aluminum and steel tariffs adding $1 billion in cost. Ford has also had its own struggles with sales and market share declines.

In addition to examining financial results, we’ll be listening on the analysts call for details regarding Ford’s $11-billion restructuring as well as cost-cutting efforts in Europe and other overseas markets. We’ll also pay attention to any details Ford shares on its recently announced collaboration with Volkswagen.

Here are some data points from Cox Automotive on Ford’s fourth quarter.

Q4 sales and market share: The automaker’s U.S. market share fell 1.2 percentage points from the year-earlier fourth quarter, with the decline coming exclusively from the Ford brand, which has an aged and shrinking product line. 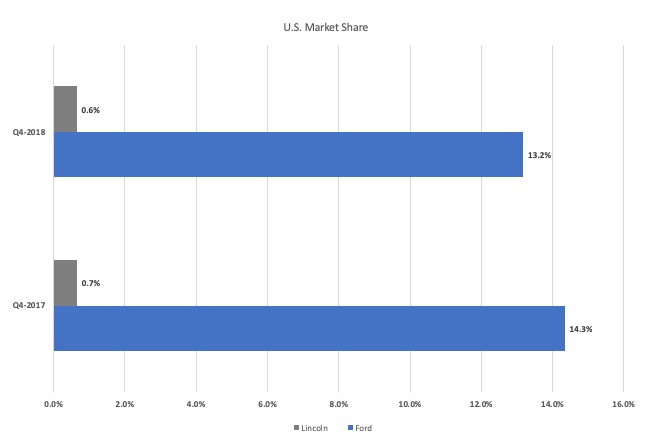 Ford announced in 2018 it would eliminate some car models. The Focus and C-Max ended production in 2018. The Ford Fusion sedan will be dropped from the mix though Ford has not announced an end date. 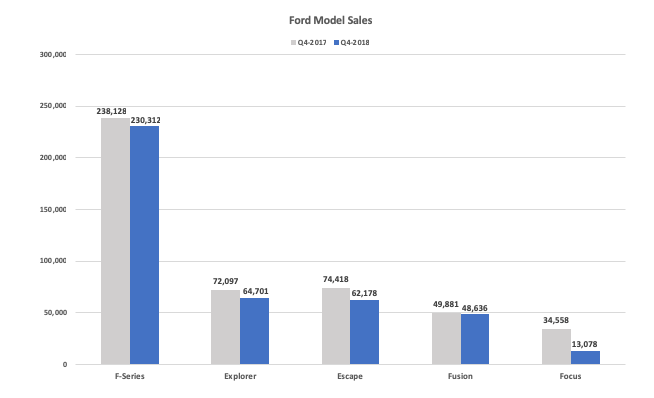 Looking ahead: Ford introduces some extremely important products in 2019. The midsize Ford Ranger pickup truck landed at dealerships this quarter after an eight-year hiatus. The new Ford Explorer and Ford Escape go on sale later this year. They are Ford’s highest volume models after the F-Series pickup trucks, and sales of both utilities were down in the fourth quarter. Lincoln starts selling the Aviator after launching the Nautilus last year.