New lease originations retreated and ended down year-over-year in 2018 after growing steadily from the Great Recession and setting a record in 2016. In 2018 the number of new retail leases came in at roughly 4 million units. For 2019, leasing will be higher than the long-term average and should rebound from 25% of all new-vehicles sold but is expected to remain lower than record levels.

However, in 2019 like the prior year, vehicles reaching their lease maturity will pose a challenge to new-vehicle sales because they represent a rich mix of popular segments as well as an alternative affordable option.

The 2017 decline in lease originations and the penetration rate reflected a disciplined business approach by lessors as they balked at pursuing volume at any cost and risking residual exposure. 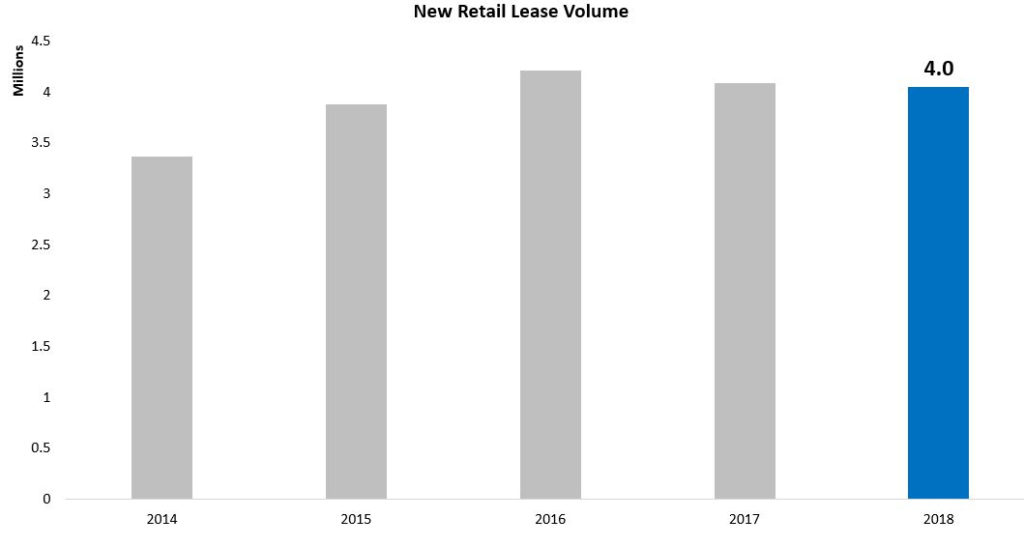 The previous peak in leasing in 1999 was “leasing done wrong.” In this earlier era of leasing, the pursuit of moving metal often ended up with poor decisions that threatened sustainability of leasing. In that era, leasing was offered on the wrong cars, principally the ones that didn’t move well as a retail sale; leasing was offered to the wrong customers, the ones that couldn’t get financed; leasing was underwritten with the wrong residual values as the guidebooks were overly optimistic and that residual was bumped another five points or more in the lease contracts; and leasing companies employed the wrong remarketing process, if any at all when the vehicles came off lease.

For the most part, leasing is being done right now. Leases are being offered on the right vehicles, ones that the lessor actually want returned; leasing is being offered to the right customers, ones who want to trade on a regular cycle and avoid the residual risk of a long-term finance contract; leasing is more appropriately underwritten with the right residual values as analysts have improved their ability to forecasting values when residuals are subvented and lessors often hold reserves; and leasing companies now focus on a much improved remarketing process that uses a holistic, planned approach from origination.

Even in a declining new retail market, leases are an essential product for new-vehicle shoppers. Though 2018 had a year-over-year decline in the number of new retail leases, the still relatively high lease penetration suggests ongoing demand.

The wholesale and used-vehicle markets have been able to absorb the volumes of off-lease units returning to market driven by a strong used retail demand. Plus, nearly-new vehicles with similar technologies pose as an attractive value proposition for consumers on the fence between a new or a used vehicle.

Lessors also need to be mindful of the level of subvention entailed in the original lease. When not overly subvented at origination, a lease return is viewed by the lessor and grounding dealer as an opportunity to sell a satisfied customer another car. However, if overly subvented, the lease return can trigger a downward spiral in both residual values and customer satisfaction.

CPO is important especially in this market as new-vehicle sales continue to moderately decline. Market trends such as rising interest rates, credit tightening and talks about tariffs have put affordability front and center. As a result, consumers who may have purchased a new vehicle years ago are now pushed into the used-vehicle market, and CPO offers them a compelling value proposition. The good news is that off-lease volumes are still very high and are fueling the used-vehicle inventory.

Last year CPO sales grew by 2% over 2017 to 3.8 million units – making 2018 the eighth consecutive year of growth in CPO. And we anticipate 2019 will be another record year. Why? Because more than 4 million leases will reach maturity this year, providing the market with ample supply to fuel additional growth.

However, manufacturers’ attitudes toward CPO have changed and diverged. Some automakers have ramped up CPO programs while others have backed away from pushing them, as some have shifting incentive and marketing investments.

When we look closer at CPO sales, three automakers account for nearly half of the market – Toyota, GM and Honda. And while Toyota leads, capturing 16% of sales with its Toyota and Lexus CPO units, GM is very close behind with nearly 15% share, followed by Honda, with its Honda and Acura CPO units totaling 12%.

Lease remarketers are well-accustomed to cyclical swings in their portfolio performance. They went from large losses on end-of-term units in 2008 to record gains on units sold in 2011. Strong equity positions enabled lessors and dealers to strategically use pull-ahead lease programs to stimulate new sales, retain customer loyalty and enhance customer satisfaction.

Swings between gains and losses are also amplified by the fact that lease return rates rise when equity positions are more negative. The lease return rate, which is the share of off-lease units not bought by either the lessee or grounding dealer, is inversely correlated to used-vehicle values. When wholesale prices were at their lowest in 2008, lease return rates were often well above 80%. As wholesale values reached new highs in 2011 and 2012, returns rates fell well below 50%. With stronger-than-average wholesale prices in 2018, the industry saw improving equity position on lease maturities.