Plummeting sales, caused by the spread of COVID-19 and the subsequent shutdown of states and businesses including car dealerships, caused the inventory of unsold new vehicles to pile up at the end of March.

The number of new vehicles in inventory closed the month at more than 3.7 million units after a 38% decline in sales for the month. That resulted in the days’ supply for March to hit 94 days, up 26 days from February and up 26 days from a year ago. Typically, changes in inventory levels are in the single digits. Traditionally, the ideal supply of vehicles is 60 days, with inventory for pickup trucks higher due to their many configurations.

The supply of new, unsold light trucks – pickup trucks and SUVs combined – stood at 99 days at the end of March, up up 28 days from February and up 26 days year over year.

The full-size pickup truck segment has been the least effected by COVID-19. Trucks jumped to the best-selling segment in March. They are doing the best of any segment in terms of shopping on Autotrader and Kelley Blue Book and in actual sales. That’s due, in part, to Detroit truck makers jumping out early to offer incentives on their brands and specifically trucks – deals that included the popular zero percent financing up to 84 months and first payment deferral for up to 120 days.

While truck inventory is higher than in February and a year ago, it isn’t out of control, and it varies widely by brand. General Motors may be disadvantaged as its inventories of the Chevrolet Silverado and GMC Sierra are skimpy compared to their competitors.

The GM trucks had a stellar first quarter, and the Silverado, with sales up 26%, easily outpaced the Ram to reclaim the No. 2 spot in the pickup race. Strong sales depleted GM’s truck inventory to 79 days for the Silverado and 83 days for the Sierra. Expect GM to fire up its pickup truck manufacturing first when it re-starts its plants.

By comparison, the No. 1-selling Ford F-Series and Ram had more than 100 days’ supply of their trucks. Later in the year, Ford will be re-tooling to produce the new-generation F-Series, if it stays on schedule, so it needs more supply.

The smaller truck market could also get interesting based on inventory. The Ford Ranger delivered solid sales in the first quarter but still has ample inventory, over 100 days. But the Toyota Tacoma, king of the midsize truck market, had booming sales, rising market share but now is low on inventory, at 73 days. Toyota likely will get its Tacoma truck plant restarted first. 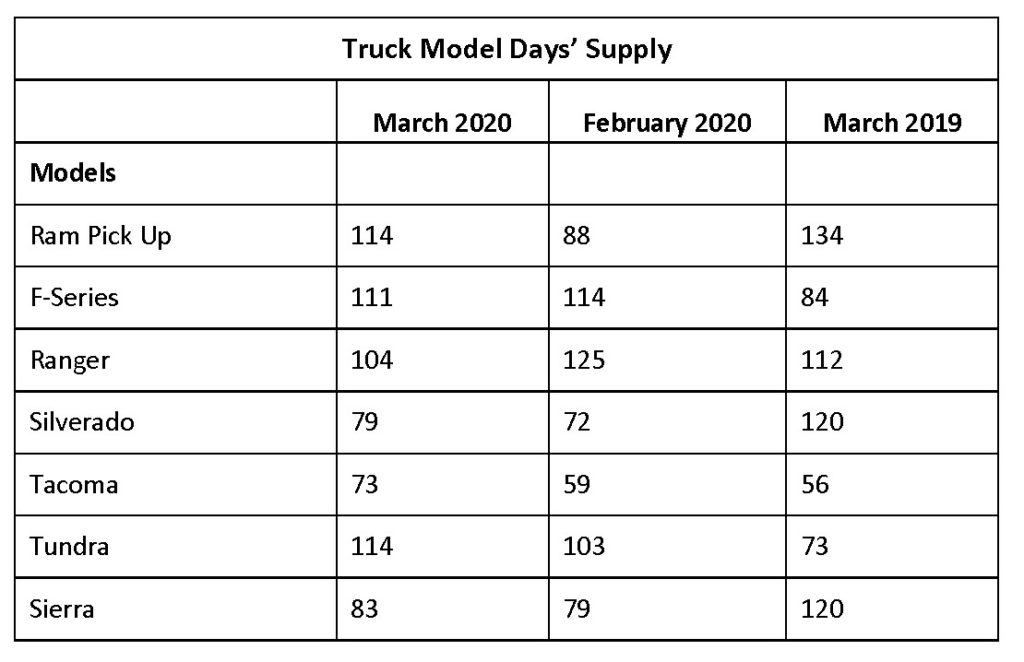 The average days’ supply of cars came in at 81, up 22 days from February and up 23 days year over year.

Kia, which went into March with slim inventories, had even fewer vehicles on dealer lots by the end of a strong sales month. It’s down to 43 days of stock. Its plant in Georgia is closed until April 27. In South Korea, Kia plans to suspend operations at its three plants which send exports to the U.S from April 23-29, while management reviews global demand.

Even Subaru, always strapped for inventory, saw a rise, but still remains at the lower end at 75 days.

BMW, Mercedes-Benz, Jaguar and Land Rover also have among the lowest inventories, as many of their models – and in some cases all – are imported from Europe, where shutdowns started earlier than in the U.S. and now have cost 1.47 million vehicles of production so far, according to an industry trade group. In Germany, government officials and German auto executives are trying to figure out how to restart the country’s largest industry.

The beefiest inventories were for Fiat and Mini, brands also suffering the deepest sales declines.

Cox Automotive anticipates that trucks, vans and middle-market SUVs will do best when the U.S. industry begins its recovery. Subcompact and compact cars along with subcompact SUVs will struggle the most since they are purchased by the least credit-worthy buyers. High-end luxury may also take time to recover as those vehicles are more discretionary purchases and linked to the stock market’s performance.

Cox Automotive anticipates that trucks, vans and middle-market SUVs will do best when the U.S. auto industry begins its recovery. Subcompact and compact cars along with subcompact SUVs will struggle the most since they are purchased by the least credit-worthy buyers, and those possibly impacted by furloughs or unemployment as the economy contracted.

On the other end of the spectrum, high-end luxury sales may also take time to recover as those vehicles are more discretionary purchases and linked to the stock market’s performance.

The one truth in all of this: Inventory will be an important measure in the coming months. Sales and production have been severely disrupted – and entirely stopped in many cases – over the past three weeks. For the industry, aligning those two activities during the coming recovery will be priority No. 1.