Tesla’s stock price slumped to its lowest level since December 2016 Monday, falling below $200 during active trading, after another analyst issued a scathing report on the electric automaker’s problems and cut the price target for the stock after heavy Wall Street selling last week.

Some worry demand for Tesla vehicles, notably the popular Model 3, is waning. That would be bad news for the brand as it tries to maintain gains made in 2018 when the Model 3 was the best-selling luxury vehicle in the U.S., easily outpacing perennial powerhouses such as the Audi A4, BMW 3 Series and Lexus ES.

If interest in Tesla is waning, it does not show in Kelley Blue Book’s shopping data. Tesla has continuously gained share in terms of luxury car shopping on KBB.com, peaking in March and retreating only slightly in April. 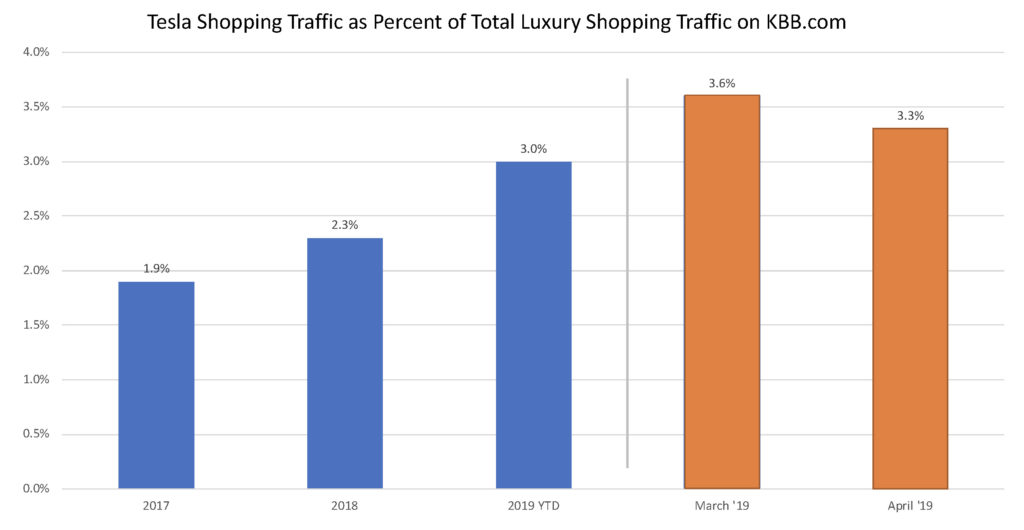 Tesla’s brand health remains stellar as well. The soon-to-be-released Kelley Blue Book Brand Watch for luxury makes, which measures consumer perception of brand health, shows Tesla continued to dominate through the first quarter of this year as it had in several quarters before. This tells us the Tesla brand is still a gold standard among luxury buyers, despite the swirl of bad news.

Tesla in fact continues to dominate our Brand Watch study, claiming the top spot in seven of the 12 factors luxury-vehicle shoppers consider important in their buying decision. Add in a second- and a third-place finish in two additional categories, and the Tesla brand can claim a Top 3 ranking in nine of 12 factors. The only blemish: Tesla dropped to 3rdplace in reputation in Q1 2019. Last quarter, Tesla ranked 2nd.

Still, Tesla’s performance is noteworthy, as it has been since 2016. The only categories in which Tesla falters are ruggedness and affordability, which don’t matter to the brand except, perhaps, when it comes to affordability and the more mainstream priced Tesla Model 3. 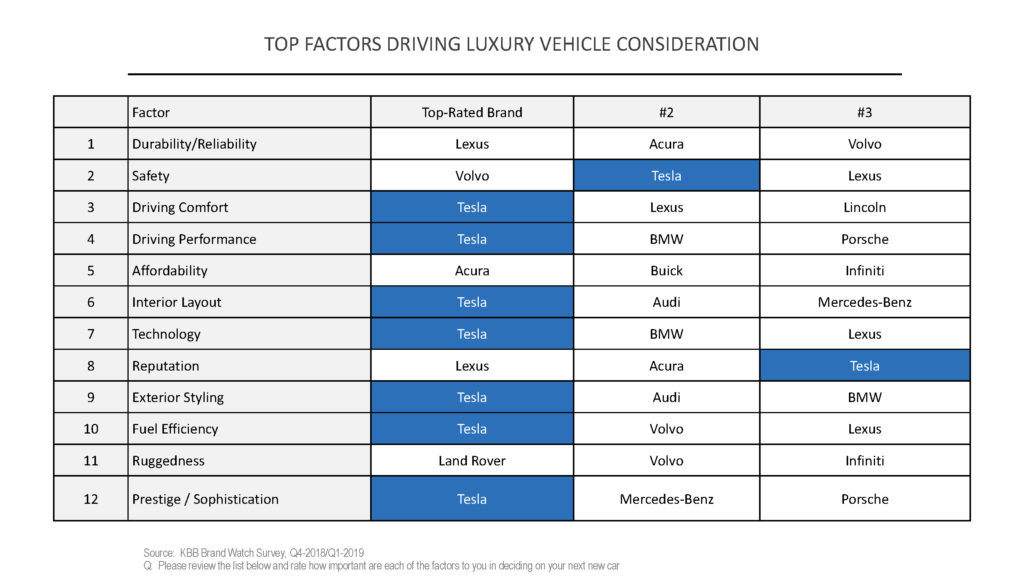 Analysts and business media are showering bad news on Tesla right now and, truth is, the company is nowhere near profitability and has a stack of obstacles to overcome.