Americans’ love for pickup trucks swelled in the second quarter, while their desire for SUVs stayed stronger, according to Q2 Kelley Blue Book Brand Watch ™ for non-luxury vehicles.

Pickup trucks set an all-time record for shopping consideration. Of all new-vehicle shoppers in Q2, 28% considered a truck, a hefty gain from Q1’s 24%. It was the only major non-luxury segment to gain from the first to second quarter.

Of the 15 most-shopped models, three were pickups – Ford F-150, Chevrolet Silverado and Toyota Tacoma. All gained in consideration from Q1. If the trend continues, more trucks could show up on the Top 15 list. 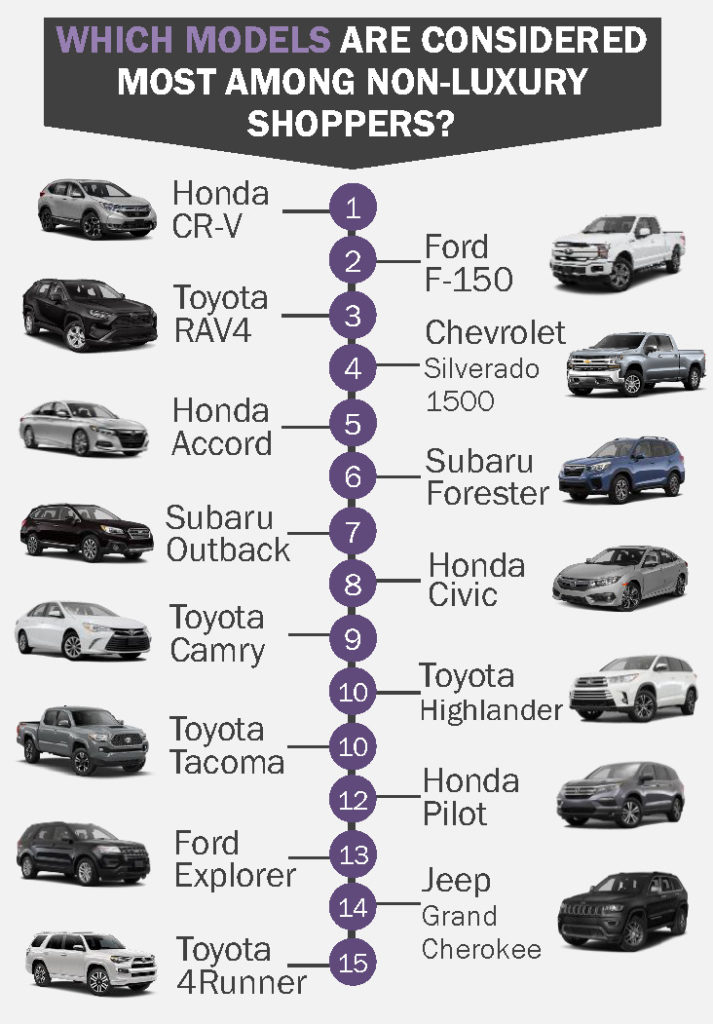 In terms of sales, Ford held onto the No. 1 spot as it has for decades. The Ram 1500 grabbed the No. 2 spot, long-held by Silverado, even though Silverado moved up four spots on the most-shopped list from Q1. Ram consideration also is up significantly.

Interest in SUVs held steady but still strong. The SUV category was the most-considered vehicle type among non-luxury segments by a wide margin. Of all new-vehicle shoppers, 64% considered an SUV, the same as Q1. The compact SUV is the most-shopped segment of SUVs.

Of the top 15 most-shopped vehicles, 10 were SUVs in Q2. The Honda CR-V was the most-shopped non-luxury vehicle for the 11th consecutive quarter. The Toyota RAV4 was not far behind.

The Subaru Outback moved up from last quarter as did the aged Jeep Grand Cherokee. The Toyota 4Runner made the Top 15 list for the first time since Q4 2016. The Top 15 list was rounded out by other Toyota, Honda and Subaru utilities as well as SUVs from Ford, Chevrolet and Jeep. 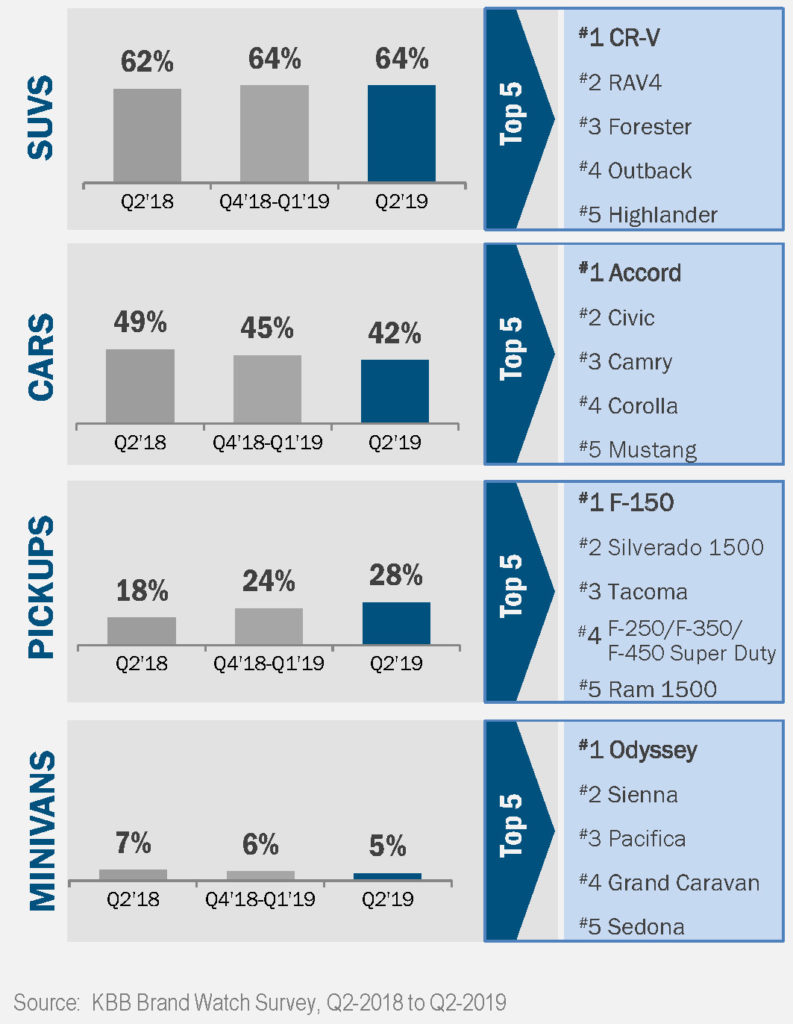 With SUV consideration still strong but plateauing of late, the question is will there be room for the onslaught of new and redesigned SUVs launching over the next two years. Already, automakers with older versions are trimming production. General Motors and Ford are dialing back production of some older utilities as sales weaken to avoid bloated inventories.

Consideration for cars slipped again in the quarter, down to 42% of all new-vehicle shoppers from 45% in Q1. Only three cars – Toyota Camry and Honda Accord and Civic – were on the 15 most-shopped list. The Toyota Corolla fell off the list entirely. Toyota recently decided not to build the Corolla at a plant it is building with Mazda in Alabama. Instead it will build a sport-utility vehicle. The question is: Have cars hit bottom in consideration and sales or will they drop further?

Minivan consideration has been in steady decline. In Q2, only 5% of all new-vehicle shoppers considered a minivan. Minivans have gotten very expensive for the average family, and three-row SUVs abound, providing worthy competition for the segment.

The declining interest in traditional cars made a dent in consideration for the Toyota and Honda brands, though they still sell large numbers of Camry, Corolla, Accord and Civic models. 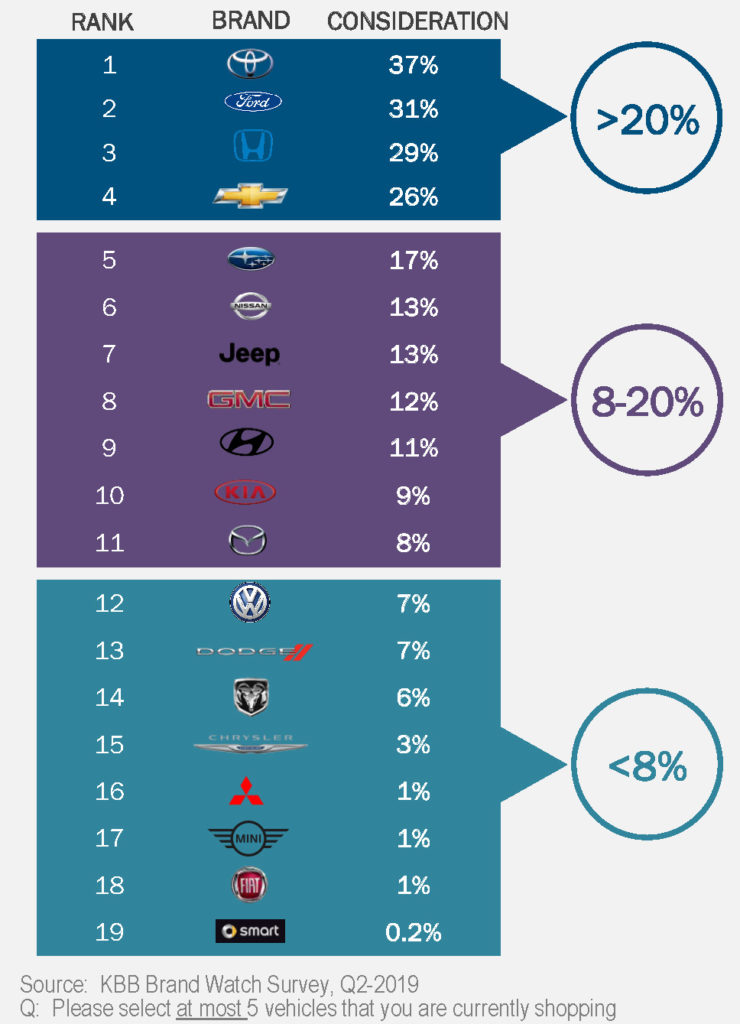 Thanks to the newly launched Ford Explorer, Ford’s consideration surpassed Honda’s and hit its highest level in two years. Ford introduces the new Escape this fall and the Bronco at year-end.

Struggling Nissan had its lowest consideration since 2015. In the quarter, Nissan reported that profits plummeted. As a result, it will cut jobs and production and revamp its marketing and strategy. In addition, the arrest of former CEO Carlos Ghosn, who is being held in Japan on alleged financial misdeeds, hangs over Nissan as does its troubled alliance with French automaker Renault.

As gas prices dipped and Americans appetite for SUVs and pickups increased, the importance of fuel efficiency dropped for consumers. Brand reputation jumped ahead of fuel efficiency, likely due to the large number of recalls, particularly from Ford, FCA and Mazda. 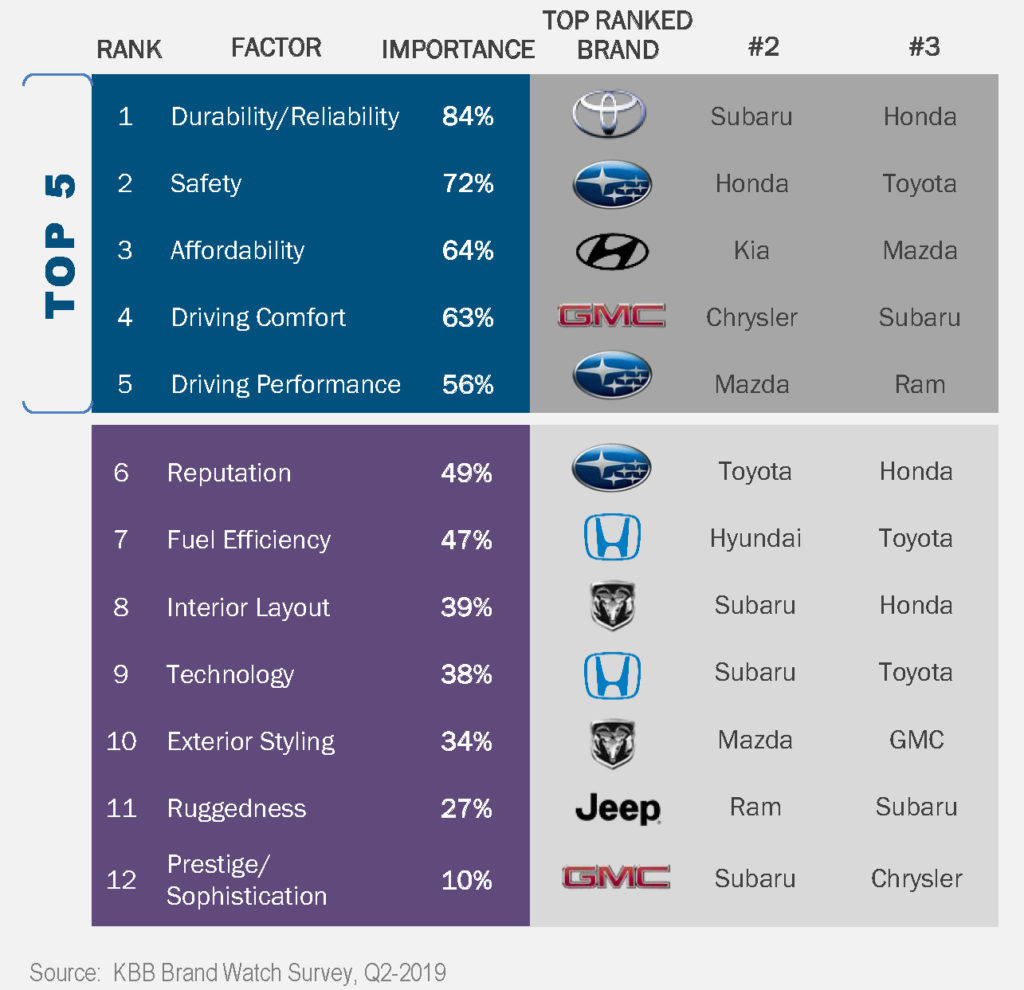 Affordability remains important, but apparently what is affordable is relative. The average transaction price of pickups is in the $50,000 territory. SUV ATPs run between $30,000 to $40,000, depending on the segment.

Not only did Honda drop in consideration, but it also slipped in factors important to consumers that it used to dominate, notably Durability/Reliability, Reputation and Fuel Efficiency. Recalls for Takata airbags that hit Honda particularly hard may be partly to blame.

Toyota regained the top spot in Durability/Reliability from Honda, a factor it has not led since early 2016.

For the fourth consecutive quarter, Hyundai ranked first in Affordability. It was second in Fuel Efficiency.