In 2018, the auto market benefited from an increase in aggressive auto lending that resulted in growth in subprime lending for the first time since 2015. Auto lending grew by 2.7% last year, supported by a 3.1% gain in subprime dollar volumes. This aggressiveness was encouraged by low defaults and higher recoveries that were related to the strong economy. But even before the year ended, the market began seeing an increase in severe delinquencies. At the end of 2018, the severe delinquency unit rate on subprime auto loans was at the highest level in a decade.

The lighter debt load relative to income partially explains why many borrowers have been able to keep current on their auto loans. However, the real difference in recent years has been the shift in labor market conditions. Wage growth continues to move in the right direction. Unemployment remains at a multi-decade low at 3.8%, and job growth levels impressed in 2018. The unemployment and wage data point to a continuation of stable consumer confidence and spending. Additionally, low gas prices have played a role in keeping loan delinquencies in check, especially in the subprime tiers. That’s because pump prices are another cost that can unexpectedly hit household budgets – either favorably or unfavorably. Given all this, it is not surprising that overall defaults, from a historical perspective, remain low. 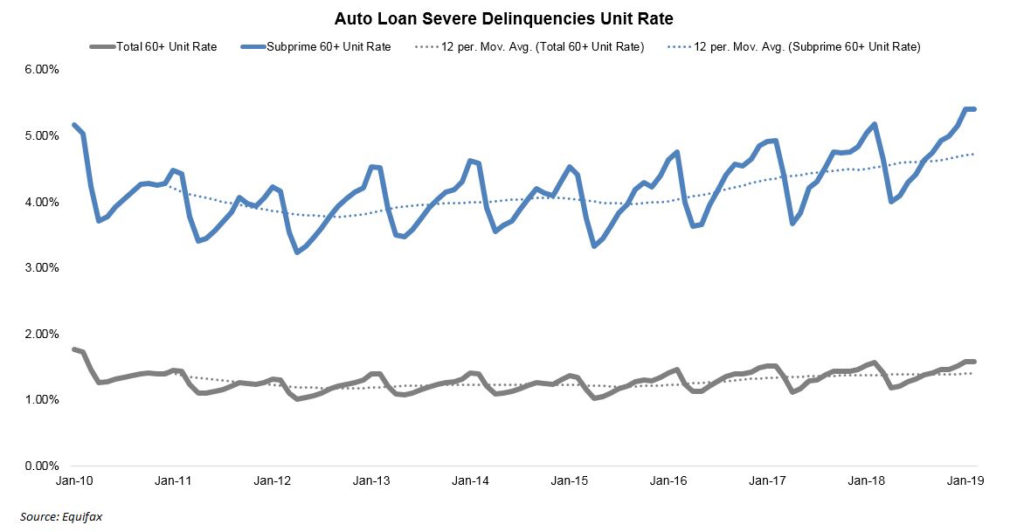 The share of auto loan originations accounted for by people with a risk score below 620 (i.e., subprime) grew from 17.4% in the fourth quarter of 2009 to 19.3% in the fourth quarter of 2018, according to data from the Federal Reserve Bank of New York. At the height of the last lending cycle, subprime accounted for approximately 30% of all auto lending. Given where we are in the economic cycle, it is not surprising that some of these subprime auto loan originations are not performing as well as in recent years. At the beginning of the recovery, many of the subprime borrowers were simply consumers who had been negatively impacted by the recession. They had good debt-to-income and payment-to-income ratios, but their credit scores were dinged by the foreclosures and short sales that allowed them to reduce their debt burden. Today, nine years into the recovery, the profile of the subprime borrower is becoming more typical of the past and foreshadows an increase in delinquency rates.

Despite good portfolio performance, repossessions – and potential repossessions – continue to grow even though the overall severe delinquency rate (60+ days) has not increased dramatically during the past five years. Based on the number of contracts outstanding and credit tier distribution, the number of repossessions will grow in the coming years even if the economic environment remains stable. If one assumes a recession scenario, repossession volumes could quickly approach two million annually.

Lenders are naturally focused on converting repossessed units into cash as quickly as possible. Various laws and regulations dealing with the processes of collateral collection and liquidation often present a stumbling block to that quick conversion. However, lenders and their auction partners have been successful in streamlining the processes that they do control.

Given lenders’ strong focus on time-to-sale, they generally achieve high conversion rates. Most repossession units receive little or no reconditioning, and as a result, wholesalers are often the buyer of repo units. Often wholesalers can achieve a profit with some light cosmetic work before re-wholesaling the unit. That arbitrage is an example of how the wholesale market efficiently gets vehicles to the ultimate end dealer in the condition desired.

In 2019, it is unlikely that the market will see the same level of auto lending aggressiveness seen in 2018. An increase in delinquencies should result in credit tightening or at the very least, a reigning in of looser terms and lower spreads. Credit tightening as lenders become more risk-averse could be why the average real auto loan rate is not declining even when other rates have declined. The credit trend is negative for new-vehicle demand. Once credit availability in new and used vehicles tightens to include borrowers with only high credit scores any overall sales decline will be exacerbated.