Toyota Motor Corp., which reports earnings May 8 for the quarter and fiscal year ended March 31, is like other global automakers in dealing with the reality that the auto industry is in a post-peak era. Generally, vehicle sales around the world set new records in 2016 and have been edging downward ever since, though, in the U.S., sales fell less than expected in 2018 due to tax reform that caused a bit of a buying spree.

In the U.S., calendar year 2019 likely will see U.S. industry sales fall below 17 million for the first time in four years to about 16.8 million and drop again to about 16.5 million in 2020, according to Cox Automotive. Sales in the early months of the year have indicated the trend. Similarly, Toyota’s own forecast is for relatively stable U.S. sales over the next few calendar years with only modest decreases.

Despite lower overall U.S. sales, Toyota intends to pick up market share. That didn’t happen completely in Q1 2019. Toyota and Lexus sold 543,716 vehicles in Q1 2019, down 5%, causing its overall market share to slip .3 percentage points. Q1 proved better for luxury vehicle sales, which were up 1% while total sales were down 3%. Lexus outperformed with sales 4% higher. Toyota brand sales were off 6%.

Toyota intends to gain share with its aggressive product launch plan. Through 2021, Toyota and Lexus will introduce 31 new, redesigned or refreshed models – seven more than the previous three years. The product offensive kicked off with the unveiling of the highly anticipated Toyota Supra at January’s Detroit auto show.

Toyota is sticking with cars despite a massive shift away from traditional cars towards pickup trucks and sport utilities – 70% trucks/utilities versus 30% and falling in cars.

In Q1, RAV4 sport utility continued to outsell America’s the best-selling car, Toyota Camry. RAV4 sales fell 8% in Q1 to 83,820. Camry sales fell even more, down 10% to 81,684 midsize cars, a category that has fast shrunk. Corolla sales held roughly steady at 73,345 cars. Tacoma pickup sales rose 8% to 58,183 trucks, a category that’s growing with competitors, including the Ford Ranger launched in Q1, but Tacoma still dominates. Similarly, Toyota Prius dominates the hybrid category, but the segment has been devastated. Prius sales were nearly halved to 12,058 in Q1. 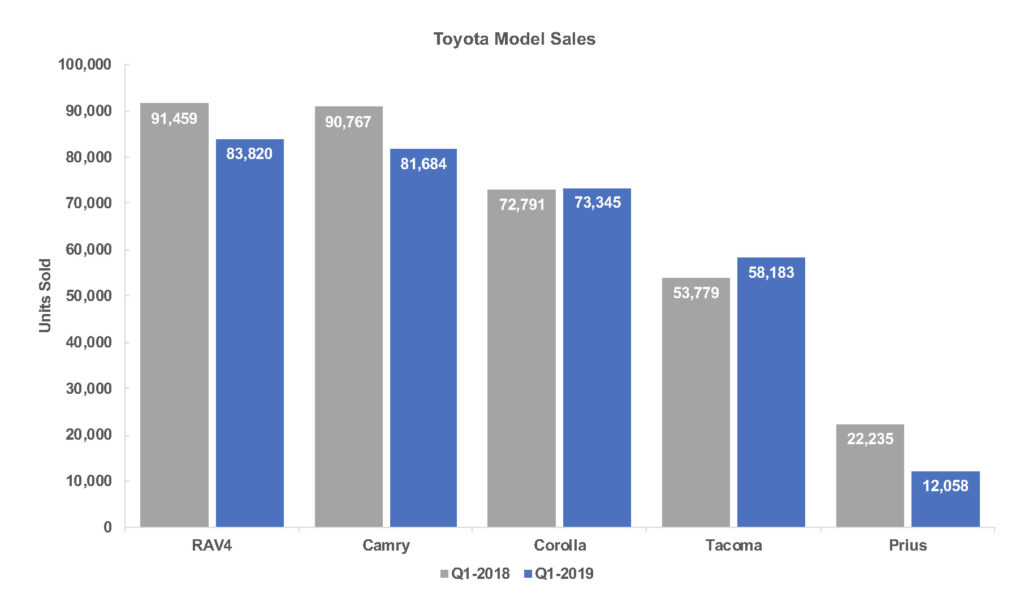 Toyota is strongly committed to staying with the car market that the Detroit Three have largely abandoned and, in fact, is aggressively going after the car-buying customers Detroit has abandoned. That may explain the 25% hike in Toyota brand’s incentive spending in the quarter. Toyota incentives now average nearly $3,000 a vehicle. Lexus incentives dipped by 2% to an average of $5,323 per vehicle.