Net income was up at $6.2 billion on higher revenue of $69.5 billion. Global vehicle sales rose to more than 2.3 million vehicles. Sales were up in Japan, other parts of Asia and Europe. However, Toyota sales in North America dropped.

As a result, Toyota lowered its annual profit forecast on softer U.S. sales, global uncertainties and a strengthening yen, which makes exports from Japan more expensive and weighs down earnings.

In the U.S., Toyota saw quarterly sales drop 2% to 606,989 vehicles, its lowest level quarterly sales since at least 2014, while the total market dipped 1%, according to Cox Automotive. Toyota brand sales slipped 1.5%; Lexus sales fell 2.6%. Toyota and Lexus share held steady at a combined 13.7%

In line with market trends, Toyota and Lexus sales were driven by higher SUV and truck sales. RAV4, now Toyota’s best-selling model, saw sales climb 9% to 116,790 units. Camry, once Toyota’s volume leader and still America’s best-selling car, held its own, with sales up 7% to nearly 95,000 units. Corolla sales plummeted 15% in the quarter. Toyota announced in July that it would not build the Corolla at its new joint-venture plant with Mazda in Alabama as originally planned and, instead, would produce a utility vehicle. Hybrid Prius sales plunged 28%. Sales of the smaller Tacoma pickup truck rose a scant 2% as it faces increased competition with vehicles like the Ford Ranger. 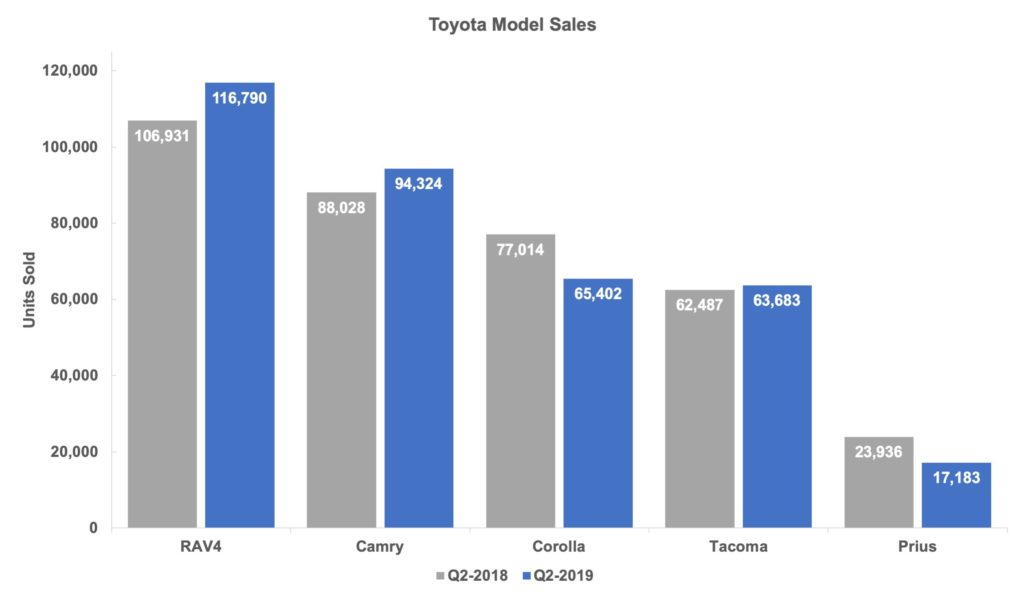