The UAW and General Motors reached a tentative 4-year labor contract covering 46,000 hourly workers but the strike – now the longest against GM since 1970 – will continue as union members vote on the agreement over the next week.

The strike already is having an impact on the overall economy and on GM’s sales and third-quarter earnings that will be released on October 29. Some GM car owners have been turned away from service departments due to a lack of parts to repair their vehicles. In GM showrooms, however, inventories of most models was healthy at the end of September. The next inventory measure, which will be posted in early November, will likely begin to show the impact of the five-week work stoppage.

As the tentative agreement was shared with workers this week, our Industry Insights team weighed in:

For the economy, we’re already seeing evidence of the strike impacting reported industrial production data for the country in September. U.S. manufacturing production fell 0.5% in September. A little more than half of the decline was from vehicle manufacturing and parts. Not only are GM workers off the job and on the picket line, workers at some supplier plants that make parts for GM have been laid off as well.

While we didn’t see an impact to the September employment data based on when the employment numbers were collected, the strike will have an impact on the October numbers, which are reported Nov. 1. With the strike lasting now for more than a month and continuing for another week during the ratification process, we will increasingly see negative news on the economy in coming weeks that has been influenced by the strike.

GM’s October sales volume will likely be lower than it would have been otherwise. While the overall inventory number was strong in early October, some GM product selection has been constrained, which would likely cause some buyers to purchase a competitor’s vehicle or wait until the desired color or trim is available.

Some buyers, particularly those in towns where a GM plant is located, may have turned away from the automaker during the strike because they didn’t want to the “cross the picket line” with a vehicle purchase. While unionized labor has lost much of its numbers, power and influence, millions of folks still sympathize and support workers.

GM plants may be ready to reopen soon, but GM suppliers may take a little longer. With the tight labor market in the U.S., some suppliers’ assembly workers likely left to take positions with manufacturers still operating. Getting those workers back may be challenging due to the limited supply of qualified and capable people, and more enticing wages may be required.

GM’s total inventory entering October was ample, with more than 750,000 units on the ground. In fact, GM’s inventory leading up to and throughout the strike till now remains above industry average overall. That may not be the case as the strike enters yet-another week while workers vote on the contract and plants start gearing up again. Our next measure in early November will be telling.

Even with good inventory in aggregate, consumers may not find the exact vehicles they want, particularly on the large SUV and truck side and within the Chevrolet brand. As the strike hit, GM was rolling out the various versions of its new trucks. An important GM truck plant in Mexico was also forced to close due to a lack of parts. GM will soon be launching the new versions of its large SUVs as well and the prolonged strike likely impacted launch plans. 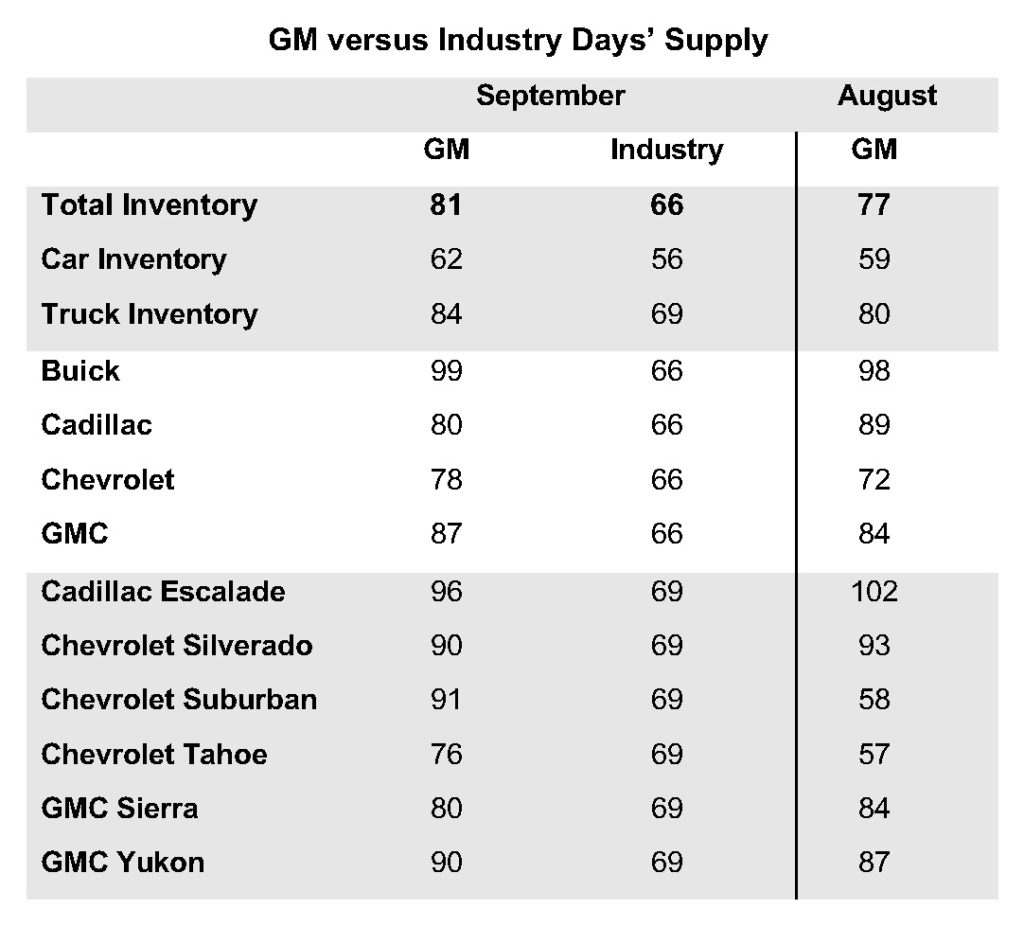 If you would like to speak with one of the expert analysts from Autotrader, Kelley Blue Book or anyone on the Cox Automotive Industry Insights team, please contact us.