Jonathan Smoke, Chief Economist at Cox Automotive, provides a mid-year check-up on the Key Trends predicted to have the greatest impact on the automotive industry in 2019.

At the year’s halfway mark, here’s an assessment of those macroeconomic trends and their implications for the future.

The economy is on track with revised expectations of 2.4% GDP growth versus the 2.6% forecast at the beginning of the year. Trade uncertainty has slowed down business investment and manufacturing output, including in the automotive sector. Plus, consumers have been more cautious with their spending. But despite the slower performance compared to last year, the economy continues to grow.

Tax law changes stoked concerns that the average American would receive less in their tax refunds – an important development for the automotive market. However, the impact was less severe than expected. The delay in refund receipt meant the used car market took longer to pick up during the spring. But data indicates that the lowered tax refund amounts were more disruptive for new and luxury vehicle markets – not the used car market. Also coastal regions were more impacted than other regions.

At the beginning of the year, financial markets were expecting the Federal Reserve to raise interest rates one more time. Since then, that sentiment has shifted dramatically. In fact, the Fed cut rates at the end of July and the markets are anticipating another potential cut in September.

Auto loan interest rates stayed flat to higher through June, despite lowered bond yields, due to credit tightening. Time will tell if the recent rate cut will translate into lower auto loan rates and if it will really make a difference to consumer.

The key reason why auto loan rates have not come down relative to how mortgage rates have dropped this year is that the subprime delinquency rate has risen to the highest since the Great Recession. Lenders are understandably more risk adverse and have either reduced their amount of lending or charged higher premiums, particularly to subprime borrowers.

Fortunately, credit is still flowing and delinquencies remain low in the broader total loan category. However, auto loans are the largest in history in terms of total volume and amount, now at $1.2 trillion. So any uptick in delinquencies that lead to defaults is a risk to the market. So the trend of credit tightening is expected to continue throughout the rest of the year.

As predicted, affordable cars continue to outperform in used vehicle values. The best performing segment is pickup trucks. Consumers tend to own pickup trucks longer and thus, they are underrepresented in the used vehicle market. That low supply coupled with high demand means strength in pricing.

The second strongest is midsize cars. These vehicles are in desirable in part because ride sharing has midsize cars as the vehicle of choice. Plus, fewest midsize cars are available for sale in both the new and used market. Demand is strong and supply is down, buffeting midsize car values.

The springtime weakness in luxury cars has abated, with recovery in the past few months. Indications point to further progress this year, but not comparable to pickup trucks and midsize cars.

The first quarter uptick in new vehicles didn’t continue into the second quarter. Additionally, the growth in the SUV category remained flat, with gains only seen in pickup trucks. (Currently, there is intense competition underway from automakers to have the number one pickup trick on the country.) However, the rise in in pickup trucks and the decline in cars means that the affordability challenge has worsened and is expected to continue for the rest of the year.

About 25% of new vehicles sold have a sticker price of $50,000 or more, and less than a third of the new vehicles sold are priced under $30,000. New vehicles under $20,000 represent a paltry 2% of the market. These pricing dynamics lower the pool of consumers who can buy new, especially coupled with higher auto loan interest rates.

The 2019 forecast for the total new vehicle market is unchanged at 16.8 million year to date. The current pace is at 16.9 million pace, off from last year’s 17.2 million. But the rest of the year is expected to slow compared to the last several years of stronger new vehicles sales in the back half of the year.

Retail sales, that is, new vehicles that sold directly from dealers to consumers, are forecast down 4% instead of just the 2% in totality. That’s because fleet has outperformed, up almost double digits relative to last year.

The forecast for used vehicle sales has been revised downward from an expectation of flat year-over-year. However, the slowdown is limited to sales of used vehicles more than 10 years old in private party transactions from consumer to consumer.

Resolution on tariffs and trade has been postponed to later in the year. Congress has yet to ratify the new NAFTA – or USMCA. And while the legislation has already been approved by Mexico, it still awaits ratification by Canada.

Assuming the pact passes, the tariff on imported cars and parts from Europe and Japan will have a significant effect on certain parts of the market, especially the luxury segment. US trade representatives will provide guidance on the best course of action for trade with Europe and Japan in the third quarter. Negotiations are underway for a deal that precludes any new tariffs.

However, China remains a concern, with no visibility on a potential trade deal. Additional tariffs on Chinese goods could apply to batteries for electric vehicles, hurting traction in that segment. BREXIT has a Halloween deadline, which could spark a new trade deal the UK. 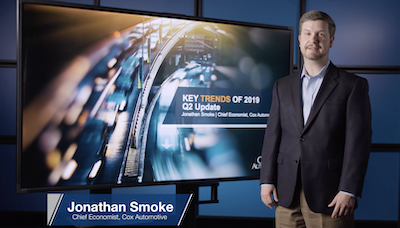 Q2 update on the Key Trends predicted to have the greatest impact on the automotive industry in 2019.