North of Detroit today at General Motors’ sprawling product development center, top officials are holding a deep dive into their future electric vehicle (EV) plans. Media and analysts alike have been invited, and cell phones, cameras and recording equipment are all prohibited. They’re talking about advanced new battery technology – calling it a breakthrough – and also showing as many as a dozen EVs, all to launch in the next few years.

You’ll likely be reading a lot about the future of GM in the coming days. It’s an important story about the future of the automobile business. GM is placing the big bet on an all-electric future, essentially dropping all traditional powertrains over time and committing to a 100% lineup of EVs. That’s a big deal and transformative. It will take a long time to happen.

GM is driving toward a future that’s hard to see right now. It’s a future with widespread demand for vehicles powered solely by electricity, where range and recharging anxieties have been overcome, and millions of mainstream buyers are ready to commit. It’s a future where EVs are price competitive with gas-powered alternatives, and the infrastructure is in place to support them. Importantly, it is a future that can be profitable for EV makers.

We know that’s not the case today. Study after study returns the same result: There is very little EV demand in the market, well below 10% consideration among car shoppers as the chart below shows. Remove money-losing Tesla from the equation and consideration has never been above 3%. 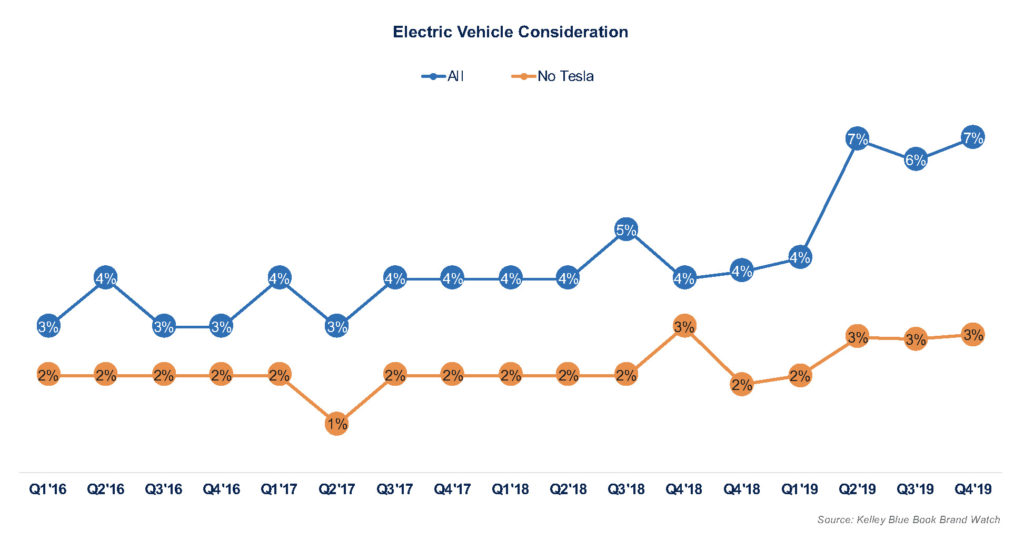 The world can change quickly though. There was zero demand for the iPhone in late 2006 – before it launched – and that reality changed quickly. Perhaps more relevant, early in the 1900s, there was little demand for Henry Ford’s passenger cars. As the founder famously said, “If I had asked people what they wanted, they would have said faster horses.”

A great product can create demand in a hurry. By the end of 2022, our team is expecting car buyers will have at least 55 EVs to choose from, up from 16 in 2019, with most automakers offering at least one full-on EV. Will demand be there? Will EV consideration jump?

The current leaders at General Motors – and others in this business – are certainly spending money as if the future is all EV. Others still are playing it safe, developing a range of powertrains, envisioning a showroom with a mix of EVs, hybrids, plug-in hybrids and super-efficient internal combustion engines.

GM made a big play today, but from our vantage point, there’s only one certainty in this conversation: The winners will be those who can create demand. And based on that, it’s hard to say who the winners will be.