ATLANTA, August 16, 2018 – In the race for self-driving cars, building consumer trust when it comes to safety is just as important as building the technology. According to findings from the 2018 Cox Automotive Evolution of Mobility Study: Autonomous Vehicles, consumer awareness of driverless vehicles has skyrocketed and the desire for autonomous features is high. The study finds 84 percent want to have the option to drive themselves even in a self-driving vehicle, compared to 16 percent who would feel comfortable letting an autonomous vehicle drive them without the option of being able to take control. The number of respondents that believe roadways would be safer if all vehicles were fully autonomous versus operated by people has decreased 18 percentage points in just two years.

With mobility services as a primary focus area, Cox Automotive continues to study the trends in alternatives to vehicle ownership, autonomous vehicles and other automotive technology, and this study reveals the growing shifts in consumer perception for the various levels of autonomy.

“As awareness around the development of autonomous technology increases, we’re seeing some dramatic shifts in consumer sentiment,” said Karl Brauer, executive publisher of Autotrader and Kelley Blue Book. “People now have a deeper understanding of the complexities involved when creating a self-driving car, and that has them reconsidering their comfort level when it comes to handing over control.”

Self-driving vehicles are seen as less safe by consumers compared to two years ago, with most notably, the vehicle autonomy preference shifting from Level 4 to Level 2 – the level currently available in most new vehicles. The Society of Automotive Engineers currently recognizes five levels of vehicle autonomy, ranging from Level 0 (human-only control) to Level 5 (no human control). In a similar 2016 study1 from Kelley Blue Book, when survey respondents were asked to make a choice between the different levels, Level 4 autonomy hit the “sweet spot” by providing all the benefits of full vehicle autonomy without stripping away the option of driver control. Now attitudes around self-driving technology have reversed with nearly half of consumers responding they would never buy a Level 5 vehicle (49 percent, up from 30 percent in 2016). Generation Z, 12-22-year-olds, and Millennials, 23-36-year-olds, are less hesitant, with less than half of respondents saying they would never purchase a Level 5 (Generation Z at 48 percent and Millennials at 39 percent).

Recent high-profile accidents involving autonomous vehicles have cast a shadow on driverless appeal and software, but the accidents may only be slightly to blame for a change in consumer sentiment. Those unaware of the autonomous incidents like the self-driving fatality in March 2018 are just as likely as those aware of the incident to believe roadways would be safer if all vehicles were operated by people as opposed to autonomous vehicles (54 percent versus 55 percent, respectively). Three-fourths of consumers say fully autonomous vehicles need real world testing to be perfected, but 54 percent prefer this testing take place in a different town or city from where they live.2

To discuss further findings from the study with a Cox Automotive analyst, contact a member of the Public Relations team to arrange an interview.

This study was conducted by Vital Findings on behalf of Cox Automotive and included 1,250 consumers in the U.S. who participated in an online survey during May 2018. Results were weighted as needed for age, gender and race/ethnicity; a full methodology is available. 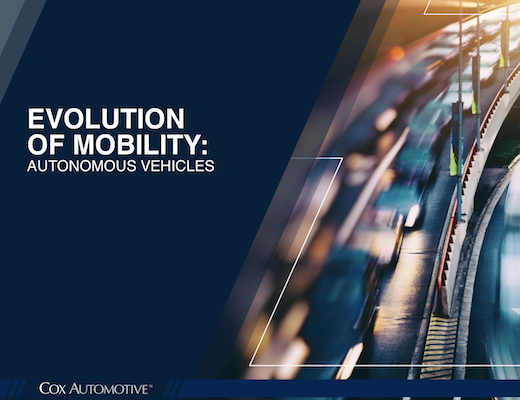 This document provides a detailed overview of key study findings.