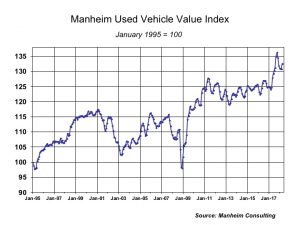 Wholesale used vehicle prices (on a mix-, mileage-, and seasonally adjusted basis) increased 1.33 percent month-over-month in April. This brought the Manheim Used Vehicle Value Index to 132.5, which was a 6.3% increase from a year ago and the highest level since last November.

Looking at trends in weekly Manheim Market Report (MMR) prices, the traditional spring bounce this year started three weeks later than it did in 2016 and earlier years and peaked in April in week 15. Used vehicle prices are now moving down but remain higher now compared to where they were at the beginning of the year than any of the last three years. 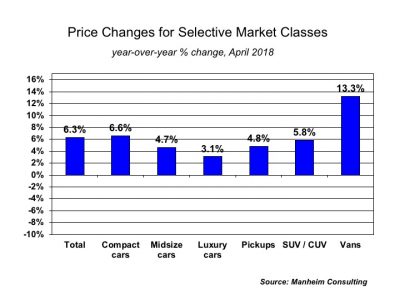 April new vehicle sales also decreased 5 percent year-over-year with two less selling days compared to April 2017. April SAAR came in at 17.1 million, up from last year’s 17.0 million; it is the eighth straight month of more than 17 million SAAR and the fifth-best April SAAR on record. Cars continue to see sharp declines as sales in April fell 21 percent compared to last year, with major car segments’ having sales declines. Light trucks outperformed cars in April and were up 5% year-over-year.

Combined rental, commercial, and government purchases of new vehicles were up 7 percent year-over-year in April, led by increases in commercial (+9 percent) and rental (+7 percent) fleet channels.

New vehicle inventories came in higher than 4 million units for the second straight month, and inventories are at their highest level since June 2017.

Continued strong economic momentum. The economy grew 2.3 percent in the first quarter, a decline from last year’s overall growth of 2.5 percent but much better than the first quarter of last year’s lackluster 1.2 percent growth. The second quarter should see growth rebound in keeping with the expected 2.8-3.0 percent likely GDP growth for 2018. Consumer confidence rebounded in April after declining in March. The April index level was the second-best level going back to November 2000.