Named after Barbara Cox, the late co-owner of Cox Enterprises and daughter of the company’s founder, this honor is awarded to women who demonstrate business leadership and community advocacy, and a commitment to advancing the automotive industry. The award was presented by Cox Automotive President Sandy Schwartz during the Northwood University Dealer Education Award annual breakfast on Sunday, February 16, at NADA Show 2020.

“Liza exemplifies this award by sharing many of the qualities and values that we admire in Mrs. Cox,” said Schwartz. “Being part of a multi-generational, family-owned business, Liza shares a close connection with the Cox family story. Like with the Cox family, dedication to employees and the communities served has always been a priority at Carter Myers Automotive. I am honored to present this award to Liza in recognition of not only her business acumen, but also her strong support of charitable giving and community service.”

“I am very honored to be recognized by Cox Automotive and know that there is still work to be done to encourage more women to consider a career in the auto industry,” said Burches. “I hope that during my daughter’s generation, women leaders in the auto industry becomes a normal part of the conversation and that the diversity of our customers and our country is reflected. As our industry evolves, we need people of all genders and races, with the brightest minds, helping work through solutions for the future! Thank you Cox Automotive for recognizing and encouraging diversity through the Barbara Cox Woman of the Year Award.”

Borches has received numerous awards including Ford’s 2009 Salute to Dealers Award, Charlottesville Woman’s 4 Under 40 Award, the 2011 Athena Leadership Award, and Automotive News’ 2013 “Top 40 Industry Leaders Under 40.” Under her leadership, Carter Myers Automotive was awarded the 2013 Hovey S. Dabney Award for Corporate Citizenship from the Charlottesville Regional Chamber of Commerce. Borches is the first fourth-generation dealer to be on the board of the Virginia Automobile Dealers Association. In 2015, Governor Terry McAuliffe appointed Borches to the Virginia Motor Vehicle Dealer Board.

Borches gives freely of her time and is actively involved in many charitable and civic activities. As a co-founder of Women United, a collective giving organization, she has helped raise over half a million dollars for non-profits serving women and children in the Charlottesville area. She is on the Board of Directors for United Way – Thomas Jefferson Area, the Charlottesville Regional Chamber of Commerce and The Boys and Girls Clubs of Central Virginia. Borches has also served on the University of Virginia Children’s Hospital Committee, a group that works to raise funds and act as ambassadors for hospital programs. Borches and Carter Myers Automotive have 14 Ambassadorships in the NADA Charitable Foundation. 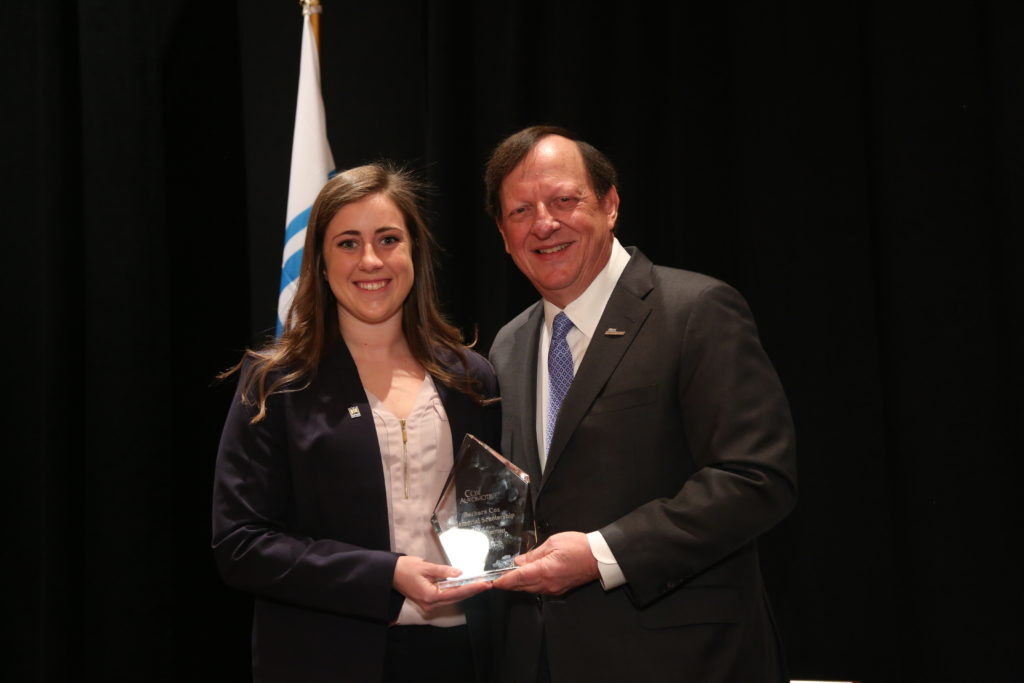 In addition to presenting the award to Borches, Cox Automotive presented a $10,000 Barbara Cox scholarship to Hannah Gearhart, a Northwood University junior studying Automotive Retail Management. Gearhart is a Dean’s List student, a member of the Northwood University track and field team and a member of the National Technical Honors Society. Having a passion for cars since childhood, Gearhart is restoring a 1998 Chevy Camaro and aspires to work in the finance department of a GM dealership.

For more information on the Barbara Cox Woman of the Year Award, visit: https://www.coxautoinc.com/about-us/diversity/barbara-cox-woman-year-award/

About Cox Automotive
Cox Automotive Inc. makes buying, selling, owning and using cars easier for everyone. The global company’s 34,000-plus team members and family of brands, including Autotrader®, Clutch Technologies, Dealer.com®, Dealertrack®, Kelley Blue Book®, Manheim®, NextGear Capital®, VinSolutions®, vAuto® and Xtime®, are passionate about helping millions of car shoppers, 40,000 auto dealer clients across five continents and many others throughout the automotive industry thrive for generations to come. Cox Automotive is a subsidiary of Cox Enterprises Inc., a privately-owned, Atlanta-based company with revenues exceeding $20 billion. www.coxautoinc.com